I am so proud to announce the September 6 release of Brábanter’s Rose, the newest novella in the Ballads of the Roses series and part of Kathryn le Veque’s wonderful de Wolfe Pack world. My hero is Elrik of Breda, the Brabáncon mercenary who wanted Ysabeau Maci (Cynric’s love) in For Love of the Rose. In Brábanter’s Rose, Elrik must face his destiny with Yrsa of Ottham, a half Norse/half Scot girl who loves him before ever they meet. Also featured in this story is Estienne de Wolfe, ancestor of William de Wolfe, the hero of Kathryn le Veque’s The Wolfe (Estienne may get his own story at a later time!)

A mercenary with a bloodstained soul.
Elrik of Breda has had enough of death and seeks a place to build a home and live in peace.

An innocent with a secret.
Yrsa of Ottham has lived too long with loss and rejection. She yearns for a place where she belongs.

Sometimes, the intervention of Fate creates magic.
Together, they embark on a quest to fulfill the longings of their hearts… but the cost may be higher than they could ever dream. 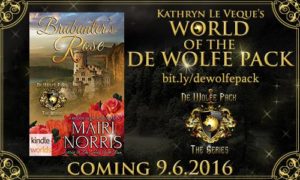 I will offer a post on Brábanter mercenaries later, for those curious about these warriors who were the elite military corps of their time.