New Release – Lanterns In The Mist

I am so pleased to offer Lanterns In The Mist, my newest release set in pre-Revolutionary Colonial America. 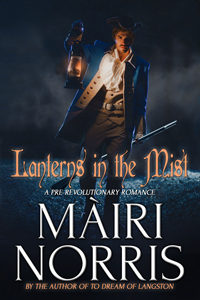 Slightly darker than my usual style, Lanterns In The Mist contains scenes with *graphic content* that may disturb some readers.

Virginia bootmaker Duncan MacCabe needs a partner and wants a wife, but not both. So what is a pragmatic man to do but combine the two. When he learns a bride ship is en route to Norfolk with women aboard who might fit his qualifications, it appears his problem is solved.

London bookkeeper Susanna Cooper is desperate. With her father’s sudden death, the family livelihood is gone. Her only sibling, a younger brother, abandons her to sail to China. All other options exhausted, she joins the complement of a bride ship headed for the Colony of Virginia. The only guarantee: employment or a husband.

Destiny joins Duncan and Susanna and love binds them, but a pitiless adversary, his desire for Susanna thwarted, plots a chilling vengeance to separate them—forever.

Excerpt:
Susanna witnessed everything. Her eyes blinked, but she could not close them, nor could she force her gaze far enough to one side to avoid the images.
Once, blood spurted from the ruffian with such force the droplets arced to splash upon her face. Crimson colored her senses, as everything within her range of vision seemed drenched in a gushing fountain of blood.
An eternity passed.
The horror became so great she swooned. The respite lasted for an unmercifully brief period.
Finally, blessedly, the ruffian’s eyes glazed. He struggled to draw a gurgling, agonized breath through the gag, but the effort failed. Though his body did not move, it seemed to collapse. The light in his eyes faded.
Through it all, her captor hummed a tuneless croon. A beatific smile curved his lips. He pushed back the cowl and removed the mask.
That serene, euphoric gray gaze bent upon her.

Lanterns In The Mist is now available at Amazon and B&N: