For Love of the Rose 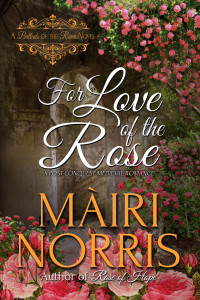 He killed her beloved husband.

When former Saxon rebel Cynric of Wulfsinraed meets Ysabeau Maci, he knows he has found the woman of his dreams. But even as he begins his determined pursuit of the lovely Norman widow, his past abruptly returns to haunt him.

Two years earlier, in a raid by Saxon rebels, Ysabeau’s husband was killed by a warrior with hate-filled emerald eyes. Cynric’s moss-green gaze reminds her of that awful day. As she comes to know him, she cannot resist his gentle smile or the thrill of his touch, but the feelings he arouses are increasingly tinged with fear he may be the green-eyed warrior who destroyed her life.

Their uneasy relationship is further tested when Cynric’s best friend, Brunwulf of Blackbridge, who shares Cynric’s rebel past, flees to him for sanctuary with his betrothed, Heagyth of Jorvick. Hard on their heels is a troop of Norman warriors intent on capturing them to face the judgment of King William.

Ysabeau’s suspicions, Heagyth’s flight from Norman justice and Brunwulf’s involvement in the assassination of a powerful Norman bishop force Cynric’s hidden past into the open. The resulting conflict threatens to rip their world apart before they can build the new lives they covet.

Back to top
mobile desktop