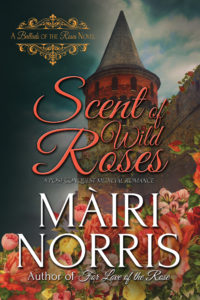 Annice spied him almost immediately.
“Faith and the saints!” The heartfelt words burst aloud from her lips, for never had she encountered so unusual a circumstance. The forest held few surprises, but the nigh naked body of a man trussed hand and foot upon the massive trunk of a great oak must surely be counted among the most bizarre.
She stilled, closed her eyes and reached out with a hunter’s senses. Satisfied no human life but his lingered near, she approached him, only to drop the satchel and stare at the unthinkable tableau. Oh, had she wondered if this newest task might be difficult? Daunting appeared the way of it.
The Norman warrior, for such his uniquely cropped hair and powerful physique proclaimed, hung suspended mayhap five feet above the ground. He still lived. The urgent sense within her had not diminished, and the rise and fall of his chest showed clearly in the slowly fading light. Yet even a warrior this powerful could not survive such grave conditions much longer.
Horror shuddered through her, for he had been conscious when his assailants tethered him. The flesh at wrists and ankles appeared bloodied and swollen from efforts to break free, but though the ropes were old and frayed, those bindings remained strong enough to thwart his desperate attempts.
She cast an uneasy glance at the surrounding woods. This section of the New Forest lay far off of even the less traveled paths, and the likelihood of anyone chancing upon the knight before he died all but nonexistent. Whoever abandoned him thus intended he should die of exposure, slowly and in great suffering. She prayed they did not plan an imminent reappearance.
With a shake of her head, she set aside the apprehension that urged her to keep glancing over her shoulder. “I have come too far to rescue you, sir, and I will not leave you. Methinks howbeit, I may have some difficulty achieving that goal.”
She stepped back to survey the situation, in hopes of discerning how best to deal with it. High above her head, two large limbs branched out to either side of the tree trunk, the man’s body suspended between them. His arms stretched straight upwards, with each of his wrists lashed to the corresponding limb where it joined the tree trunk. Two rough ropes passed across his massive torso. One crisscrossed heavily muscled shoulders and passed beneath his arms to encircle the tree. The other doubled at his waist in the same manner. Further cords secured his knees and ankles to the tree, almost totally restricting movement of the lower body.
She gauged her strength against his much greater size. How could she get him down without help? Somehow, she had to get high enough to cut the ropes that bound him, while simultaneously using her own rope to lower him safely to the ground. More importantly, how could that endeavor be accomplished without damaging him further?
’Twould be tricky, for he was badly hurt. He had been tormented and savagely beaten. From head to toe, great bruises blackened his body, overlaid by the blistered, angry red welts of many burns. Rivulets of dried blood from numerous cruel knife slashes, some deep enough to require stitches, spread like splotches of carmine dye against his skin.
A large, reddened swelling on his right forearm—most likely his sword arm—bespoke a possible bone break. Dried blood flaked from a large lump beneath the hair at his right temple. His swollen nose, likely broken, crooked to one side. Blood had trickled from one corner of split, puffy lips to cake in the stubble on his chin. So swollen and discolored were his features she could only wonder how favored his normal countenance might be.
Divesting herself of bow and quiver, she sank to her knees and rifled through her satchel. Rope, aye, she brought enough. With her hadsæxe she sliced through the bonds at his ankles, gently pulling them free of his flesh.
Absorbed in the task, she failed to note the whisper of sound behind her. A muscular forearm snaked around her waist and jerked her backward, pinning her against a hard, mailed form. The steel of a sharp blade offered dire menace to the fragile skin of her throat.
She froze, terror putting her thoughts to flight.
“As you value your life, wench, you will tell me where to find those who did this deed.”

The Art of Manliness